EXAMINING OF THE RELATIONSHIP BETWEEN THE NUMBER OF COMPANIES OPENED AND CLOSED AND THE NUMBERS OF ACCOUNTING PROFESSIONALS: THE CASE OF TURKEY

In this study, the long-term relationship between the numbers of companies opened and closed and the number of employees working as professional accountants was investigated. The data set of the study was a panel data set with a total cross-sectional dimension of 71 units (71 provinces) and a time dimension of 11 periods (2010- 2020), and a total of 781 observations for each series. Ten provinces (Ağrı, Ardahan, Bayburt, Bingöl, Hakkâri, Iğdır, Kilis, Siirt, Şırnak, Tunceli) without a provincial chamber of TÜRMOB (the Union of Chambers of Certified Public Accountants Turkey) were excluded from the study. Cross-sectional dependence (CD) between the series was checked using the CD test developed by Pesaran (2004). The homogeneity of the series was tested using the delta (Δ ̃) and corrected delta (Δ ̃_adj) tests reported by Pesaran and Yagamata (2008). The stationary states of the series were analyzed using the Cross-sectionally Augmented Dickey Fuller (CADF) test developed by Pesaran (2007). Finally, the long-term relationship between the series was examined using the Westerlund and Edgerton (2007) Panel Lagrange Multiplier (LM) test. It was found that the series were cointegrated, and they acted together in the long term. 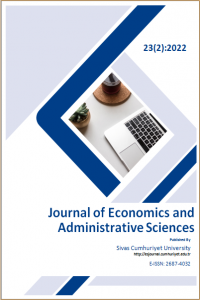